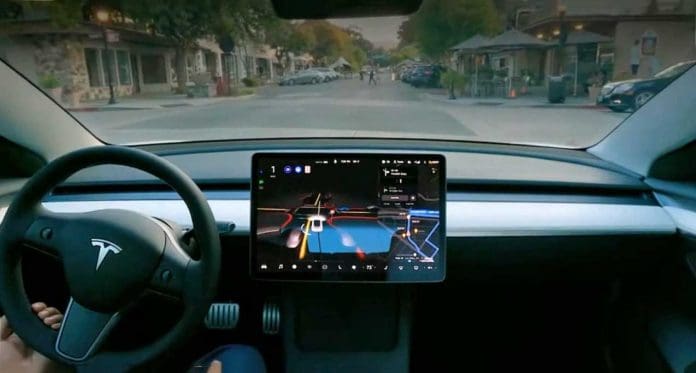 November 2022 – While Tesla has long sold and promised the Full Self-Driving package which allows turns and navigation on city streets, it’s still considered to be in an early-stage beta test. Drivers must remain attentive while using the software.

Starting November 23th, 2022, Tesla has opened up the FSD Beta to all those in North America, regardless of safety score as long as they request it from their screen in-car.

September 11th, 2022 FSD Beta 10.69.2 (2022.20.15) rolled out to testers and promises to be a big improvement for intersections, roads without map data, roundabouts, and even unprotected left turns. Release notes below.

January 7th, 2022 – FSD Beta 10.8.1 – (2021.44.30.5) Small update to fix some issues but is also more lenient with driver strikes that result in FSD Beta to no longer be available (e.g. after not paying attention). With this release, the strikes are reset after each FSD release and increases the number of strikes to 5.

October 25th, 2021 – FSD Beta 10.3.1 (2021.36.5.3) was released after a fix to 10.3 which rolled out with a host of significant bugs (including false Automatic Emergency Braking, AEB at freeway speeds). Those FSD owners who requested access and have a greater than 99 Tesla Safety Score should be getting access. Release details are below.

On September 24th Tesla released the 2021.32.22 software update that included a new button for those who purchased the Full Self-Driving package and have compatible vehicles with Hardware 3. Those customers had a new “Request Full Self-Driving Beta” button under Controls > Autopilot.

For those interested in joining the FSD Beta program, you’ll need to agree to allow Tesla to monitor your driving and calculate a safety score.

Tesla will monitor your driving behavior for at least seven days.

Once you sign up to the program, your Tesla app will show you how you’re doing so you can improve (iPhone only for now):

If you participate, be sure to read the Tesla Safety Score Beta information posted on their website to understand exactly what they’re tracking and how it works.

Note that driving on Autopilot will not be included in safety score calculations but the miles driven will be included in the total, according to Tesla. This means that you may want to use Autopilot on the freeway, especially if you have a hard time maintaining following distances to other cars.

After at least seven days of good driving, you’ll be eligible to join the FSD Beta program. It’s still unclear whether that will happen immediately after the seven days or whether they will gradually add people to the program over time (guess the latter).

Where Tesla Drivers Have the Most Issues

According to the Tesla Safety Score data in the app, most people have problems in the following areas:

So be sure to leave lots of room between you and the car in front of you when traveling greater than 50 MPH. Per Tesla:

Specifically, while using the FSD Beta feature, you or another driver of your vehicle received:

This is your only warning to please keep your hands on the wheel and remain attentive at all times when using Autopilot. The car is not autonomous, and if you aren’t paying attention, a crash could happen, and you or others could get hurt, or worse, so failure to abide by this warning will result in removal of the FSD Beta feature from your vehicle.

So be sure to pay attention and keep your hands on the wheel (or yoke!).

In the meantime, check out the myriad of videos being uploaded to YouTube on a daily basis or the ones highlighted below.

Here’s a good overview of the current state in the form of a ‘training video’:

Tesla’s Full Self-Driving option has long held the promise of being able to automatically navigate with Autopilot on any road, including city streets; even so far as becoming a Level 5 (see What do Levels Mean?), fully autonomous system. Customers who have spent thousands of dollars for the expensive Full Self-Driving package expecting city street Autopilot are also eagerly awaiting this functionality.

That said, it’s been a long road to achieving autonomous driving as navigating on any open road under any condition, is one of the most complex tasks for any AI system to handle. Originally Elon Musk targeted a fully autonomous trip from Los Angeles to New York in 2017, only to drop that goal altogether later on. Then, Full Self-Driving was targeted to be “feature-complete” by the end of 2019, only to move the timeline further out.

Eventually, we learned that Tesla was doing a major overhaul of the AI-based Autopilot system, a “rewrite”, so-to-speak. In late 2020, this rewrite, known as “Full Self-Driving Beta” (or FSD Beta), started rolling out to a small select group of testers with a likely broader release in 2021 or early 2022. While the Full Self-Driving package will have the ability to automatically turn on city streets, despite its name, it will not be fully autonomous (Level 5), and will still require an attentive driver for the foreseeable future.

At the heart of the new Full Self-Driving rewrite is the capability for the neural network computer to utilize all eight cameras around the car, allowing it to create a virtual 3D (4D with time) environment for better situational awareness.

Creating this 3D model (4D with time) is especially critical for navigating city streets since that environment is far more complex than freeway driving. It will allow the vehicle to make complex maneuvers as mentioned by Tesla in the Beta release notes:

“When Full Self-Driving is enabled your vehicle will make lane changes off-highway, select forks to follow your navigation route, navigate around other vehicles and objects, and make left and right turns.“

That said, because this is a software rewrite and the entire system needs to be tested, not only the new features, early beta testers are being warned to be extra vigilant:

“Full Self-Driving is in early limited access beta and must be used with additional caution. It may do the wrong thing at the worst time, so you must always keep your hands on the wheel and pay extra attention to the road. Do not become complacent.“

Beta testers are uploading tons of videos on YouTube with each release so you can virtually ride along to see how things are improving:

As you can see, this is still very early release testing software, likely still a long way off from public release, but has impressive capabilities.

The team at Tesla appears to be making rapid progress, releasing updates to Beta testers every 5 to 10 days, according to Elon Musk, so improvements should come quickly.

However, after the problematic FSD Beta 10.4 release, which causes phantom Automatic Emergency Braking on the freeway, dangerous enough that Tesla had to roll it back, Tesla is being more cautious with future releases and testing.

While the Full Self-Driving update still appears to be a little ways off, it’s great to see real progress being made. That said, it’s important to remember that “Full Self-Driving” still very much requires an attentive driver and is not a “Level 5” fully autonomous driving system, despite the name. However, it’s great that Tesla continues to push the envelope in this area and provide exciting new Autopilot updates and finally bring significant new assisted driving functionality to those who purchased the Full Self-Driving package. We’re excited to see what the future holds!