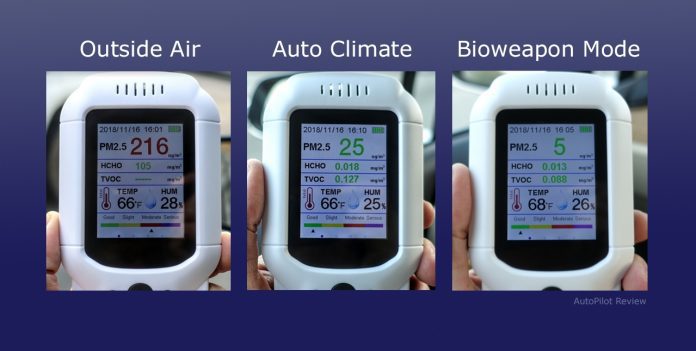 Fires and air pollution are unfortunately becoming more and more common these days. When the tragic fires struck California back in November 2018, the air quality levels in the San Francisco Bay Area and Los Angeles region had extreme levels of pollution, enough where avoiding almost any outdoor activity was recommended. For those who were lucky enough to have recent-year Tesla Model X or Model S electric vehicles with the HEPA filter installed, they were able to take advantage of a special mode call “Bioweapon Defense Mode” that Tesla Motors claims is 100X more effective than regular car filters.  It not only removes smoke particles, gaseous pollutants and fine particulate matter, including mold spores but also helps against allergens for those with asthma or other allergies.

According to Tesla’s marketing statement:
“Inspired by the air filtration systems used in hospitals, clean rooms, and the space industry, we developed a HEPA filtration system capable of stripping the outside air of pollen, bacteria, and pollution before they enter the cabin and systematically scrubbing the air inside the cabin to eliminate any trace of these particles. The end result is a filtration system hundreds of times more efficient than standard automotive filters, capable of providing the driver and her passengers with the best possible cabin air quality no matter what is happening in the environment around them.”

Does the Tesla Model 3 Have a HEPA Filter?

Only the Tesla Model X and S have the option for the HEPA filter.  The filter is so big, it would not fit in the Model 3. Here’s a photo of CEO Elon Musk holding the giant HEPA filter vs a normal car filter:

According to a recent tweet by Elon Musk in regards to the Model 3’s air filter:

Good, but not hospital grade. S & X were designed to be proof against an actual bioweapon attack. Requires a giant filter with separate acid & alkaline gas neutralization layers. Not enough room in Model 3.

While it won’t protect against a military-grade bio attack, the built-in air filter in the Model 3 works very well. A tip from Elon for best possible air filtration and clean air: “Set air flow to recirculating mode & manually raise blower speed to 5 in Model 3 for best air quality. Air filters are smaller than S/X, so clear air is achieved by circulating through filter several times.”

Here is a video showing a Tesla Model 3 owner testing the recirculation mode.  After about 10 minutes of being on recirculation, the air is as clean as using a HEPA filter.  Quite impressive!

Tesla tested the HEPA filter Bioweapon Defense Mode by putting a Model X into a large bubble and testing PM 2.5 (fine particulate matter – the most dangerous type of air pollution) inside the vehicle. Note that Air Quality Index (AQI) is a different, but related measurement to PM2.5 levels. For more information on AQI and PM2.5 levels, see this Wikipedia article. Here’s how the testing setup looked:

Normally the PM 2.5 level for good quality air, according to the EPA, is below 12 µg/m3. Above 150 µg/m3 is considered unhealthy.  For reference, the air in Beijing averages around 56 µg/m3 and 20 µg/m3 in Los Angeles. For this test, Tesla pumped particles at 1000 µg/m3 (very dangerous levels) to see how effective the HEPA filtration system in the Model X could be.  Within two minutes in Bioweapon mode, it was able to bring PM 2.5 levels to almost undetectable levels.

How to Use Bioweapon Defense Mode

If you have a vehicle with the HEPA filter and Biodefense mode, to turn it on, you press the climate controls and then press the biohazard symbol:

You’ll then hear air flow go to maximum as it creates a positive pressure inside the cabin to prevent outside air from leaking in.  In addition, any outside air will now go through the HEPA filter via the HVAC (Heating, Ventilation, and Air Conditioning) system.

Does the HEPA Filter Work in Automatic Climate Mode?

From what we can tell, the HEPA filter does not seem to be used when climate controls are used normally in automatic mode. HEPA air filtration is only employed when you turn on the Bioweapon Defense setting.

We tested a Model X with a HEPA filter installed during November 2018 when California wildfires blanketed the Bay Area with unhealthy levels of smoke particles (PM 2.5 of over 200 µg/m3).  Here’ what we found.

So there you have it.  The HEPA filter work as advertised.  If you’re in a smoky situation, just be sure to activate the Bioweapon mode to get the full benefit of the giant HEPA filter.