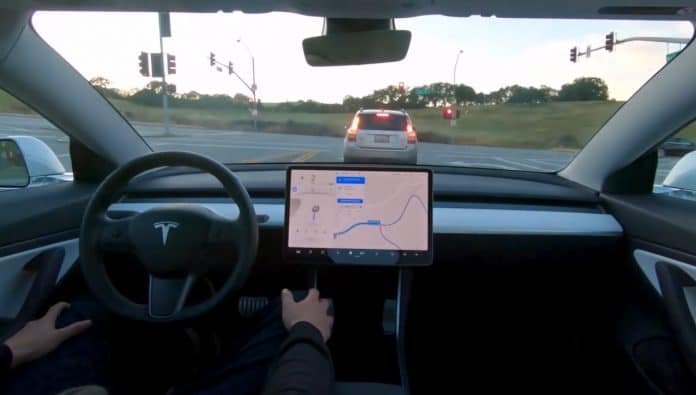 During Tesla Autonomy Day in April of 2019, Elon said that he expects Full Self-Driving to be “feature complete” by the end of 2019, meaning the features will have been completed by Tesla internally, but not yet available to consumers.

He later tweeted that it will require Hardware 3 (or the Full Self-Driving computer):

The ‘sneak preview’ is part of the 2019.40.50.1 update, that rolled out as of Christmas Eve. It uses Tesla’s powerful new Full Self-Driving computer and the Neural Network to better perceive its surroundings and show some of them of visualizations on screen. Tesla uses cameras to perceive its environment rather than LiDAR (see Cameras vs LiDAR), so accurately understanding the environment using cameras is critical to completely driverless Full Self-Driving.

Many of the critical road markings and traffic signals and signs are now, with this latest update, displayed as visualizations on screen (that require the more powerful FSD Computer, aka Hardware 3 to render). Specifically city driving visualizations, including traffic lights and their various colors / states, road markings, garbage cans and more.

Here’s a brief video here of the types of road markings and traffic signal states it can detect:

City driving is one of the big hurdles for Full Self-Driving, so accurately recognizing stop lights and stop signs is important towards becoming ‘feature complete.’

We actually tested how far Tesla has gotten versus their autonomous demo they showcased during Autonomy Day 2019. You can see the original Tesla Demo and our test using a Model X with the Full Self Driving “Sneak Preview” update:

Elon expects true driverless Full Self-Driving to be available consumers in 2020 which will also power the Tesla Robotaxi fleet. That’s a very ambitious timeline given the relatively slow progress to date, so we’ll see how far Tesla gets in 2020 towards achieving that goal.

Likely, most Tesla owners will happy just to get improvements to the already best-in-class Autopilot system, like better handling of stationary objects at freeway speeds, improved merging, etc. Either way, we’re excited to see what the update brings!