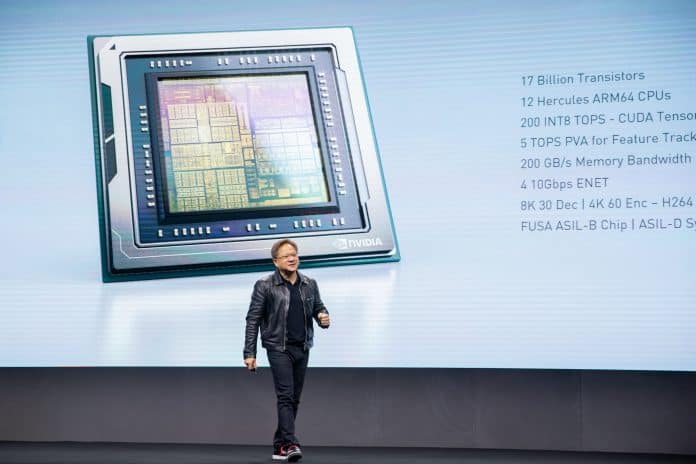 December 2019 – Self driving vehicle technology took a step forward with NVIDIA’s announcement of its next-generation Orin chip, officially called the NVIDIA DRIVE AGX Orin. The Orin chip builds on the NVIDIA’s Xavier chip and DRIVE hardware, which has helped provide the raw computational power required by autonomous vehicles over the past few years. The company indicated that Orin will be produced in numerous configurations and speeds to meet a variety of manufacturing needs. NVIDIA expects the ramp up to commercial production of Orin processors to take about two years. Orin is expected to power a range of self-driving cars, including full self-driving, or level 5, systems.

Orin is a system-on-a-chip (SoC) device capable of delivering the ultra-fast input and output speeds. The SoC combines an Arm Hercules CPU cores with next-generation Nvidia graphics processing (GPU) cores and a groundbreaking 17 billion transistors. This is almost twice as many transistors as its predecessor Xavier. According to Nvidia, Orin can process more than 200 Gigabytes of data, allowing it to keep up with the continual information flowing from sensors on self-driving vehicles. In total, top-end Orin models should process around 200 trillion operations per second (TOPS).

Nvidia also indicated that the Orin chip has better performance per watt than the Xavier model, using about 60 to 70 watts per 200 TOPS, critical for use in vehicles where low power and heat dissipation are required.

Nvidia sees the Orin chip as the centerpiece of the DRIVE platform moving forward as the company makes a push to manufacture a viable control center for self-driving vehicles as they move closer and closer to full self driving capabilities.

Staying Ahead of Tesla

Tesla originally used NVIDIA chips as it developed its own self driving software after parting ways with Mobileye (see AP1 vs. AP2 vs. AP3). Recently, Tesla unveiled its own Full Self-Driving computer (aka FSD Computer or Hardware 3.0) citing the fact that it needed more powerful hardware that suppliers like Nvidia couldn’t provide. Tesla’s FSD Computer runs at 144 TOPS, so Nvidia’s new Orin chip at 200 TOPS handily beats the latest silicon from Tesla. We know Tesla is already in the midst of developing a new version of the FSD Computer (Hardware 4.0?) so we don’t expect Nvidia’s advantage to last for long.