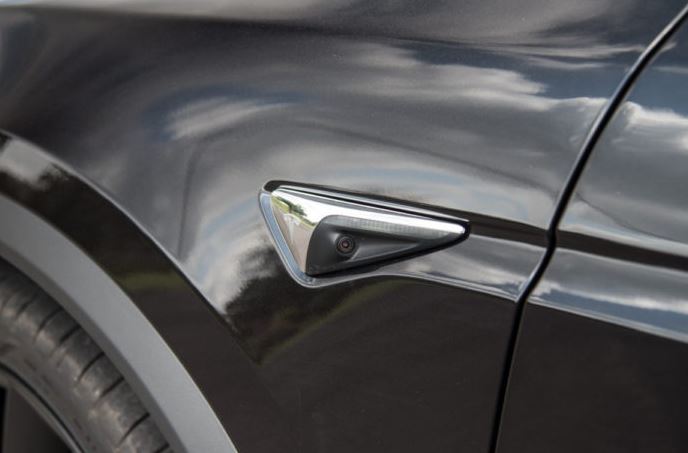 Tesla originally released Autopilot in late 2014 and has been pushing the envelope of self-driving capabilities ever since. While new Tesla vehicles do come standard with basic safety features, the true self-driving characteristics come into play with Autopilot, specifically, the Full Self-Driving option which was brought back in early 2019 – see our Full Self-Driving is back article.

Since the original Autopilot (dubbed Hardware 1 or AP1) there have been a couple of updates (AP2 and AP2.5) and a new major update called Hardware 3 (AP3), or the Full Self Driving Computer (FSD Computer), which was released in April 2019. This leaves many people asking what’s the difference between Tesla AP1 vs AP2 (Tesla Autopilot 1 vs Autopilot) or Autopilot 2.5 vs 3, etc. This article breaks down the differences in each one

First, before we dive into the different Autopilot versions, it’s important to explain what Autopilot means. In general, Autopilot on Tesla is the basic (now standard) package that allows the vehicle to follow other vehicles and auto-steer in a lane, primarily on freeways (although it technically can also be used on city streets). There are many other cars with autopilot, but only Tesla offers the more advanced Full Self-Driving package where the vehicle has far more advanced driver-assistance features.

It’s important to note that even though it may be called “Full Self Driving” by Tesla, this is not autonomous driving but instead what’s called Level 2 driving (see What Do Self-Driving Levels Mean?). This essentially means that the driver is required to pay attention at all times and have control over the car. While the car may be doing most of the work, there are plenty of unforeseen circumstances that may occur, that the system just can’t handle.

That said, Elon Musk said during Autonomy Day that he expects full Level 5 driving in 2020. Given his usually optimistic timelines, we’ll just have to wait and see.

In a nutshell, Autopilot in Tesla parlance means that the car can steer itself on low curvature roads with clear lane markings and automatically accelerate and decelerate with traffic, all the way from freeway speeds down to stop-and-go traffic. It even works on city streets and will recognize stoplights and stop signs. Note that this self-driving capability, simply called ‘Autopilot’ is now standard.

For a full breakdown of all the current Autopilot and Full Self-Driving features, see the full Autopilot review article here.

Hardware, by definition, includes all the built-in sensors such as cameras, radar, and computing systems. Hardware is updated much less frequently (every one or two years) than software and is generally called Hardware 1 (or Autopilot 1 or AP1), Hardware 2 (AP2), Hardware 3 (Full Self-Driving Computer), etc.

Software updates happen much more frequently (every month or two) and include new features for the entire vehicle, not just Autopilot updates. These software updates are usually called something like Version 9, Version 10, etc.

This article will be focused on the hardware updates (e.g. AP1 vs AP2 vs AP3 or Full Self-Driving Computer).

The hardware naming can be a bit confusing since they’ve been called different things over time. Here’s a quick glossary:

The original Tesla Autopilot system with semi self-driving capabilities was released in October of 2014 and available on the Model S, and later on the Model X. It was offered as part of the “Tech Package” and was a joint development between Mobileye (since acquired by Intel) and Tesla. It featured a single front-facing camera and radar to sense the environment plus Mobileye’s hardware and software to control the driving experience.

At the time, it was one of the most sophisticated systems on the market and pushed the envelope in terms of what such a system could do on a consumer vehicle. In fact, it was so good that when Tesla decided to build their own system, it took them years to catch up to the baseline Autopilot functionality in AP1.

Despite not having the latest Hardware 3, Autopilot 1 cars still perform very well. Mobileye is considered the leader of Advanced Driver Assistance Systems (ADAS), which is the reason Tesla chose them in the first place. Most people care primarily about stop & go adaptive cruise control and lane-centering on the freeway, which AP1 cars do extremely well. So if you’re considering a used Telsa AP1 vehicle with Autopilot and care mainly about assisted freeway driving, they are a great option.

How To Identify AP1 Tesla Vehicles

The easiest way to quickly tell if a Tesla vehicle is AP1 is by looking at the side-panel signal indicators. If they have no built-in camera, they are AP1 (or no Autopilot at all). For example:

In addition, AP1 Tesla Vehicles will have a single front-facing camera above the rearview mirror on the front windshield (if it’s missing, the vehicle does not have Autopilot hardware at all).

Tesla announced it would be parting ways with Mobileye in July 2016 and begin developing its own self-driving Autopilot solution. Tesla felt that Mobileye was not moving quickly enough and that there was room for the opportunity to provide greater self-driving features by using machine learning / neural networks which were coming of age at the time.

In late 2016 Tesla began rolling out vehicles with Hardware 2, called AP2. A major change from before was that all vehicles would now come standard with Autopilot-ready hardware and that customers could either buy Enhanced Autopilot upfront (at a discount) or activate it later over-the-air for a slightly higher price.

The new hardware included a powerful NVIDIA AI computer, more cameras that covered all sides of the vehicle for a 360 view, and better radar and ultrasonic sensors.

Tesla was clearly signaling with this new hardware platform that machine learning / neural networks based primarily on camera inputs were the future. This was a big bet and luckily for Tesla, neural networks had advanced to the point where self-driving using a visual-based neural network had become feasible.

One big issue was that, at the time, Tesla’s neural network software was not yet up-to-par with Mobileye’s solution, so customers who purchased vehicles had inferior Autopilot experience until late 2017, when the software finally caught up with Mobileye.

Ironically, one small item missing from AP2 hardware was the rain-sensing windshield wiper sensor. Tesla decided to simply use the cameras the neural network to sense rain instead of using a dedicated sensor like other manufacturers use. Well, since Tesla was so busy getting Autopilot up to par with Mobileye, it delayed the rain sensor capability until much later (and comically, it’s still in ‘beta’ today).

How To Identify AP2 Tesla Vehicles

As with AP1, the easiest way to quickly tell if a Tesla vehicle is AP2 is by looking at the side-panel signal indicators. If they have built-in cameras, they are AP2. For example:

So what’s the difference between AP1 and AP2? A lot. These are two completely different hardware and software (at least for the self-driving portion) systems.

The AP1 hardware is limited to only one forward-facing camera and radar, while AP2 has eight cameras surrounding the vehicle for full 360 vision. This will, of course, allow for much greater environmental and situational awareness of the vehicle, for example, allowing the system to see whether there is a car or bicyclist in the adjacent lane. Additionally, the radar and ultrasonic sensors were improved for longer-range sensing.

The AP1 platform was powered by Mobileye’s EyeQ3 platform which is essentially a hard-coded system to recognize objects. Tesla worked with Mobileye to enhance it for its vehicles, but it could only be pushed so far. On the other hand, the AP2 platform uses the NVIDIA DRIVE PX 2 computing hardware which is a powerful GPU designed for machine learning and neural networks. They are two completely different systems not compatible with one another and Tesla will not be updating AP1 much longer.

Since the AP1 platform is completely different, it will not be updated much longer. Tesla’s focus is on AP2 and beyond.

If you want the possibility of getting the latest and greatest Autopilot or Full Self-Driving features, be sure to purchase an AP2 vehicle or above since, as of this writing, they can be upgraded to AP3, also called Hardware 3 or the Full Self Driving Computer. If you just want basic adaptive cruise control with steering assist, then AP1 is fine.

Tesla released a minor update to the AP2 hardware suite in mid-July of 2017, coined AP2.5 (although, not officially by Tesla). It included an updated forward radar, a Continental Advanced Radar Sensor ARS410, with a slightly longer range (558 ft / 170 m), and the NVIDIA DRIVE PX 2 with secondary node-enabled (for redundancy). It was a relatively minor update and doesn’t appear to have any discernible functional benefits currently.

In late 2018, Tesla announced it is developing its own processing Hardware to replace the NVIDIA DRIVE PX 2 it was using previously. Tesla now calls Hardware 3 (AP3) the Full Self-Driving Computer, or ‘FSD Computer’, for short. This allows for 10X the current processing power and cheaper costs to produce. Current AP2 owners will be able to upgrade their NVIDIA cards to Tesla hardware (free for those who ordered Full Self-Driving or an extra charge for those who didn’t). The Full Self-Driving computer began rolling out to all Tesla vehicles on April 2019.

The FSD Computer (aka Hardware 3 / AP3) began shipping in all Tesla vehicles in late April of 2019. Upgrades for customers with AP2 who purchased FSD, began in 2019.

Identifying whether a Tesla vehicle has the Full Self-Driving Computer (Hardware 3) done within the car’s screen menus if you have software version 2020.4 or greater. Go to Controls > Software and select “Additional Vehicle Information” which will show which version of the “Autopilot Computer” you have. If you have Hardware 3, it will say “Full Self-Driving Computer”.

Now that Tesla has consolidated its Autopilot options, it’s clear that the Full Self-Driving (FSD) option will be the primary beneficiary of Hardware 3 improvements. Expect to see ever-increasing autonomous capabilities being slowly rolled out to Tesla vehicles with that option (anyone who purchases FSD will also receive Hardware 3.0).

With powerful custom hardware and dedicated AI software to match, 2022 should be an interesting year for Tesla Autopilot Full Self-Driving capabilities. Tesla detailed much of this during their Autonomy Day for investors, including the Tesla Network for ride-hailing and using Model 3s as ‘Robo Taxis’, which seems a while off.

That said, we now know that Tesla is no longer using radar and is only using cameras for Full Self-Driving Autopilot, called Tesla Vision. Since mid-2021, vehicles are no longer shipping with forward-facing radar.

In addition, during the 2021 Tesla AI Day, Elon Musk said that a new FSD Computer, dubbed ‘Hardware 4’, will begin shipping with the Cybertruck in 2023, along with improved cameras.