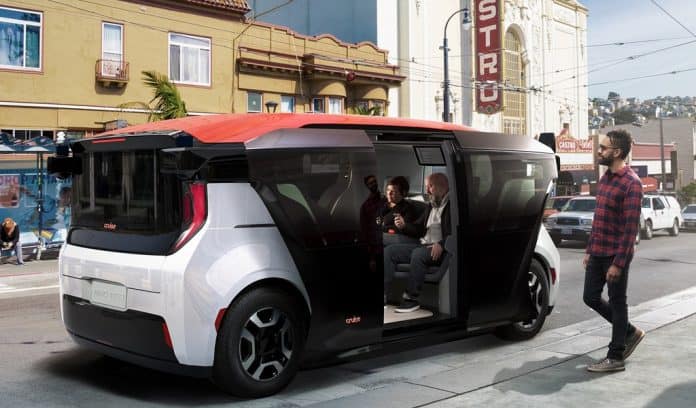 A new driverless shuttle vehicle by GM’s subsidiary Cruise made its debut at a San Francisco, California, event on January 21, 2020 named Origin. The all-electric ride-sharing vehicle is the result of a three-year collaboration between Cruise, GM, and Honda. Dan Ammann, Cruise’s CEO, estimates vehicles like Origin will last up to 1,000,000 miles, run day and night, and save the average San Franciscan up to $5,000 a year.

Two rows of three seats each face each other, similar to a commuter train car. Each Origin seat provides an airbag, extra legroom, and amenities, including device chargers, USB ports, and wireless internet. Overhead digital displays give passengers their ride details, and a camera on the interior roof monitors activity and analyzes rider feelings.

The design and engineering teams made strategic decisions in producing the Origin. Producing it as an all-electric vehicle will result in cost savings for potential fleet owners and will give them environmentally friendly units. This rear-wheel-drive shuttle is made to run at highway speeds without a combustible engine or manual assistance.

There is no steering wheel, foot pedal, or other emergency control for humans to operate, but there is an SOS button. As a safety feature for bikers, the boxy vehicle features doors that slide open, minivan style, rather than hinged doors that swing open into traffic.

The vehicle is loaded with camera, radar and LiDAR sensors placed on the out edges to perceive the environment including a camera placed on a swivel that can rotate for better viewing angles.

While Ammann said Origin is ready for production, its present use will be limited to locations such as GM’s Michigan campuses and Honda facilities outside of the United States. The Cruise Origin must meet Federal Motor Vehicle Safety Standards (FMVSS), legal requirements for vehicle design, manufacture, safety, and performance before it can travel on public roads.