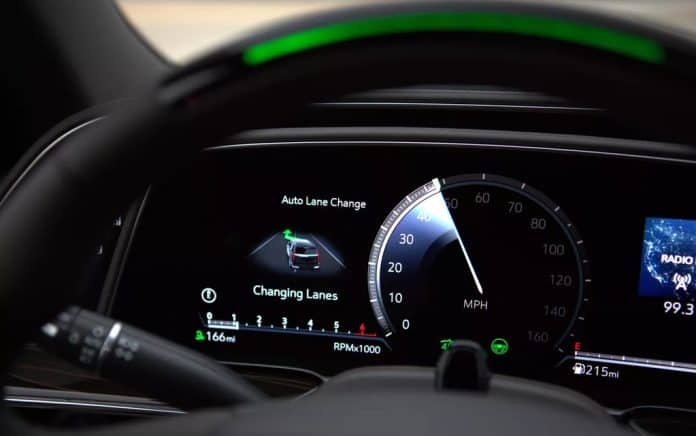 General Motor’s Super Cruise autopilot system is one of the most robust driver assistant systems available and is often compared to Tesla’s Autopilot. The big news for 2021 is that Super Cruise now available on the 2021 Cadillac Escalade, a more popular vehicle than the sedans on which it premiered originally.

GM is not standing still however and has been slowly upgrading Super Cruise by adding features such as the ability to make lane changes on demand, a feature Tesla’s Navigate on Autopilot has had for a while.

We’ll touch on the key features in this article and highlight videos that showcase the functionality.

GM Super Cruise, like Tesla Autopilot, provide “Level 2”, partial automation. Level 2 vehicles handle tasks such as steering or acceleration. However, a human driver must be always be engaged with operating the vehicle and paying attention to the environment.

Super Cruise works as a semi-autonomous system that includes adaptive cruise control, lane-keeping assistance, and automatic emergency braking. The vehicle allows hands-free operation only when it can tell the driver is watching the road ahead. Sensors of its infrared monitoring system follow the driver’s eye movements. So, your car knows whether you’re paying attention to traffic or the burger on the console beside you. If you appear not be paying attention, it uses lights, audible sounds, and seat vibrations to alert you. When it doesn’t get the proper response within a certain time, the vehicle slows, calls an Onstar operator, turns on hazard lights, and stops, disabling the system.

Super Cruise uses high-definition maps manually generated by a fleet of vehicles using LiDAR (Light Detection and Ranging). While it’s similar to radar, LiDAR operates with light waves of a shorter wavelength. LiDAR emits laser waves, rather than radar’s long radio sound waves. This technology enhances safety by providing a detailed map of major highways allowing the vehicle to know precisely where the lane should be in addition on using its onboard cameras and GPS for real-time information.

Vehicles with Super Cruise on compatible LiDAR-mapped highways receive a continuous flow of information on road conditions for about 1.5 miles ahead. Data including exit-only lanes and curves feeds into the system, so drivers can respond and resume vehicle control when needed.

Super Cruise, GM’s hands-free driving system now also allows drivers to change lanes automatically. With the upgraded version of Cadillac’s Super Cruise semi-autonomous driving system, the car retains control of the lane-switching maneuver. By activating the turn signal, you alert the car to begin looking for a gap in the lane. Messages on the gauge cluster give status reports, telling you the vehicle is searching for an opening or changing lanes. When the car finds the right size space, it moves into it. However, even though the car is handling the lane change, watching the road remains your responsibility.

To give motorists continuing confidence in this new lane-changing capability, Mario Maiorana, Super Cruise chief engineer, led GM’s team in producing improved hardware and software. So how does the vehicle know when to stay in its lane or shift? Upgrades of rear-facing sensors and advancements in software algorithms enable the system to track vehicles as they approach from behind. HD map information provides greater detail, enhanced steering control, and changes in the user interface help the Super Cruise system navigate highway interchanges.

Tesla’s Autopilot technology doesn’t use HD Maps since Tesla feels there is no need to do so. Tesla uses radar and cameras to sense the environment in real-time, just like a human driver would via a powerful neural network computer, called the Full Self-Driving Computer. This allows Tesla vehicles to operate on almost any road where lane markings are clear, as opposed to Super Cruise vehicles that can only operate on LiDAR mapped roads.

General Motors Super Cruise and Tesla Autopilot have different Driver Monitoring Systems (DMS). While GM’s system monitors eye movement, Tesla Autopilot uses steering wheel pressure to gauge whether a driver has hands on the wheel or is paying attention. Tesla drivers have been seen circumventing the system, using objects such as bottles or bananas to simulate hands-on vehicle operation, whereas it’s much harder to do so with Super Cruise’s eye-tracking system.

Overall, Tesla offers a more sophisticated and advanced system with promises of full self-driving coming soon that is continually updated with over-the-air upgrades. That said, Tesla drivers must pay more attention to monitor the system than with Super Cruise which is far more limited in scope but offers a very safe and well-tested hands-free experience.

When GM first introduced its automotive self-driving technology in the Cadillac CT6 sedan, it only worked on a limited number of divided highways. Thanks to GM’s engineers performing a software update and producing new LiDAR map data, motorists in Canada and the United States enjoy Super Cruise on over 200,000 miles of divided highways.

This time around, the automaker is offering its new lane change system on other Cadillac models. It’s currently available on the 2021 Cadillac Escalade and will be rolling out to dozens of vehicles in the GM lineup in the next couple years, including GMC.