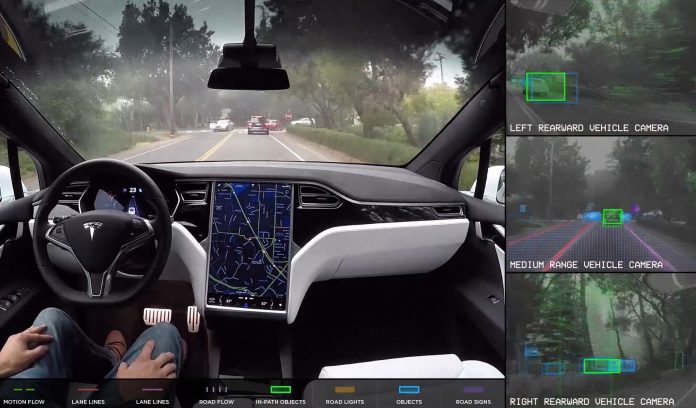 As Tesla continues to advance its self-driving and autonomous technology, it showcases what Tesla Full Self-Driving cars can do along the way. Its been a long journey and this article showcases some of the demonstrations Tesla has provided over the years, including the most recent ones.

Starting as early as 2016, Tesla posted two impressive videos demonstrating future autonomous AutoPilot capabilities (now part of the Full Self-Driving option), letting viewers see, even back then, how the cars can essentially drive themselves without human input. This is considered Level 4 or Level 5 driving (see What do Levels mean?).

Of course, Tesla has not yet released these capabilities to their production vehicles, but during Autonomy Day, Elon promised that autonomous Full Self-Driving capabilities should be ‘feature complete’ by the end of 2019, with consumer access likely in 2020. Of course, that didn’t materialize, unfortunately.

These videos were created in late 2016 showing what could be done back then. One can only image how far they’ve come since then and that full autonomous driving could become reality with Hardware 3 (AP 3), barring rigorous testing, of course.

This video shows the future of self-driving with Tesla’s Autopilot system taking control of the vehicle, all the way to a Tesla parking itself. The car starts out its journey from driveway, going into city traffic and then onto a highway. The car makes turns, stops at stop signs and traffic lights and changes lanes with ease. The person behind the wheel barely keeps his hands on the bottom of the steering wheel and is there only to take over in case of an emergency. The video also showcases occasional views from the cameras on bumpers and fenders.

Towards the end of the video, the human gets out of the car at a Tesla-owned building. The car swings around the parking lot and stops as a person walks in front of the car. The vehicle then expertly parks itself in a parallel parking spot and shuts off the motor, This video seems a bit clunky because the motion is sped up rather than showing the video in normal speed. It’s set to “Fade to Black” by the Rolling Stones for a humorous touch.

This demonstrates the technology and hardware behind Tesla’s Autopilot system. This is from the same vantage point as the first video, and it is shown faster than real-time. The main screen shows an ordinary video from a driver behind the wheel, but he is not in control the car and he keeps his hands in his lap. On the right of the screen, the video shows three camera views in rectangular boxes for the right rear, left rear and front-facing camera views.

The cameras show obstacles in green and blue translucent boxes. The middle yellow stripe on a road is in red. Street signs appear in purple boxes. The safety cameras relay an augmented reality-type picture on the screen in black-and-white. Most of the action takes place along country roads with no sidewalks.

At one point in the middle of the countryside with no traffic, two women are on the right side of the two-lane road jogging. There is no sidewalk. The car recognizes the obstacles on the camera and then stops to make sure the joggers are not going to get in the road. The car proceeds after a few seconds. Shortly after that, the vehicle sees a parked car in a driveway as the car turns right. The vehicle stops ever so briefly to make sure the other car isn’t backing out of the driveway. This might pose a problem if a car behind the Tesla doesn’t see the self-driving car stop suddenly. Of course, this autonomous vehicle isn’t driving very fast to begin with because it came from a complete stop before stopping again in a 35-mph zone.

At a couple of stop signs, the car knew when it could safely pull out into traffic and make a turn. After one stop sign, the car stopped for a split second before proceeding. The car parks itself at the same Tesla building from the first video. The car has to wait several moments for people and cars to move out of the way. This video has more detail to it with regards to the practical considerations of a self-driving car system.

One of the most self-driving-like features that current customers with Enhanced Autopilot or Full Self-Driving can take advantage of is Navigate on Autopilot. This impressive feature, shown above, allows users who set a destination that travels on closed-access highways or freeways to let the car fully drive itself from on-ramp to off-ramp, including lane changes. When the video was made above, users still had to confirm lanes changes, but now, with the most recent software updates, this is no longer required.

During the impressive Autonomy Day where Tesla went into great detail on its Autopilot and Full Self-Driving progress, it released the video above using a Model 3 with development software to showcase just how close the software is to being ‘feature complete’ by the end of 2019, as promised by Elon Musk. Again, Tesla did not meet this deadline, of course.

Although Tesla missed several key promised dates, they keep pushing forward with updating the software, including only cameras via Tesla Vision and they now hope to release the FSD Beta software to more testers in 2021.

During Tesla AI Day in August 2021, they again showcased another demo as shown as part of the introduction to the event, here:

Interested in Tesla Autopilot? Dig in a bit more here: