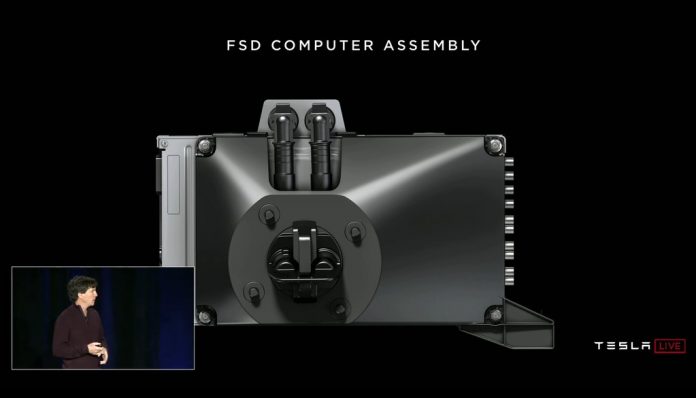 Starting in late 2019, Tesla began retrofitting older Model S and X vehicles with Hardware V2 and V2.5 to the company’s custom-designed Hardware 3, aka Full Self-Driving (FSD) computer. Owners who purchased the Full Self-Driving option and are running Hardware 2 and above will receive direct replacements of the NVIDIA HW2 and HW2.5 computers Tesla installed previously.

Which Vehicles Qualify for Retrofitting?

All vehicles produced after April 2019 should already have the Full Self Driving, FSD Computer (Hardware 3). Those produced prior to early 2019 and have Hardware 2 or 2.5 (aka AP2 or AP2.5 – see how you can tell) and have purchased the Full Self-Driving option, will be eligible. Eventually, every purchaser of a Full Self-Driving package with AP2 or AP2.5 will receive the upgrade, which has the same footprint as the NVIDIA computing hardware it replaces. Tesla Model S and Model X vehicles are undergoing upgrades to the FSD Computer so far and the company is not officially accepting requests. That said, vehicles brought to a service center for other services and are eligible for a replacement may receive the new hardware if the service center has the computers and its technicians are trained to install the new equipment. An owner of a Tesla Model S P100DL built in April 2018 received surprise notice of the upgrade when he picked up his vehicle from a service center in Santa Barbara after replacing a HEPA filter. Because the hardware is in limited release right now, all service center personnel and mobile service teams may not have details about the rollout.

Rolling out in Q1 More Rapidly

Elon tweeted that in 2019, the software was not fully taking advantage of Hardware 3.0 (FSD Computer), but that in 2020, that will change:

Q: How does Tesla determine which vehicles are eligible for the upgrade?
A: Tesla upgrades older vehicles in VIN batches (usually every month). Your vehicle must be part of that eligible batch to be upgraded for the “Full Self Driving Computer Retrofit” (as it’s called).

Q: How will I know when I am eligible for the upgrade?
A: Tesla will let you know when your car comes in for service if your car is eligible. They are not reaching out proactively at this point.

Q: Can I contact Tesla to see if I’m eligible?
A: You should be able to contact your local service department to see if your VIN is eligible.

Q: Can I schedule an appointment to be upgraded if I’m eligible?
A: Yes, once you’re eligible, you should be able to schedule an upgrade.

When compared to previous computers, the Tesla-designed Full Self-Driving Computer has a processing capacity that offers 1,000% improvement in the electric cars’ computing power, said Musk during an ARK Invest’s “For Your Innovation” podcast in early 2019. Unhappy with the lackluster performance options in computers on the market, Musk decided Tesla would build the hardware it needed. Upgrading the hardware means rebuilding the software stack to accommodate the new platform. Tesla is familiar with this routine, as it faced a similar challenge when it switched to NVIDIA’s hardware from Mobileye’s technology.

In addition Tesla has started to utilize Hardware 3 starting with the Full Self Driving “Sneak Preview” released in December 2019 that shows on screen visualizations in preparation for future autonomous driving capabilities.